While riding by horseback over the Big Horn Mountains in the fall of 1910, Warren C. Gorrell and Frank Ogilvie Horton, two close friends who were also brothers-in-law, first spotted a portion of the lands that they would later own and operate as the HF Bar Ranch.

​On April 17, 1911, the first lands of the Ranch, consisting of 520 deeded acres, were purchased by deed issued to Warren Gorrell and his wife, Demia Butler Gorrell.

The HF Bar Ranch was incorporated as a business entity on June 21, 1913.  The founders, incorporators and original owners and directors of the Ranch were Warren C. Gorrell, his wife, Demia Butler Gorrell, and their brother-in-law, Frank Ogilvie Horton.

Warren Gorrell was born in 1874 in Taylorville, Illinois, and was raised there and in Chicago, Illinois.  Demia Butler Gorrell was born in 1872 in Minneapolis, Minnesota, and grew up there and, principally, in Indianapolis, Indiana.  She was the oldest daughter of Chauncy Butler, a son of Ovid Butler, the founder of Butler University in Indianopolis.  Frank Horton was born in 1882 in Iowa, where he spent the majority of his youth.

Demia Butler Gorrell was the oldest sister of Gertrude Scovel Butler Horton, who was born  in 1881 in Indianapolis, Indiana, and who was the first wife of Frank Horton.  Demia Gorrell and Gertrude Horton had another sister, Sarah Elizabeth Butler Raycroft, who was born in 1874.  The sisters' respective husbands, Warren Gorrell, Frank Horton and Joseph E. Raycroft, were fraternity brothers at The University of Chicago.

Warren Gorrell and Demia Butler Gorrell, both graduates of The University of Chicago, were married in Indianapolis, Indiana, in 1900.  They had five children, two sons and three daughters, but one son, Scovel Butler Gorrell, died within days of his birth in 1903.

While an investment banker in Chicago from 1908 to 1929, Warren Gorrell became a multi-millionaire.  He was the President of Warren Gorrell & Company and Gorrell And Company, investment banking firms located in the landmark Rookery Building, at 208 South Lasalle Street in the center of Chicago's financial district.

In 1911, primarily with the financial backing and capital of Warren and Demia Gorrell, the Gorrells and Frank Horton purchased the first parcels of the lands that were to become the HF Bar Ranch.

While the Gorrell family resided principally in Chicago, the Horton family lived year-round in Wyoming, as Frank Horton managed the daily operations of the Ranch.  Frank and Gertrude Horton, who were married in Chicago in 1908, had three sons, William Scovel ("Bill") Horton (born in 1910), Jack Ogilvie Horton, Sr. (born in 1911), and Ovid Butler ("Bobby") Horton (born in 1916).

Throughout the early decades of the HF Bar Ranch, the Horton and Gorrell siblings and cousins spent their summers together, initially as playmates, later as teenagers and young adults, and always as very close friends.

At various times during the years from 1911 to 1929, the HF Bar Ranch Corporation included among its assets the HF Bar Ranch and at least three other neighboring ranches.  Specifically included were Paradise Ranch, which was then another dude ranch, the UM Ranch, which was primarily a cattle operation, and two chicken and poultry ranches known as the Middle Ranch (previously known as "the Haynes Place") and the Lower Ranch (previously known as "the Tathwell Ranch").

The UM Ranch (next door) was acquired in May 1919 as the largest addition of land to HF Bar holdings and consisted of 2,400 acres, which were deeded, as the initial acquisition had been, to Warren and Demia Gorrell.

In the mid-1920s, Warren Gorrell, also, acquired vast areas of land along the Pacific Coast in and around Big Sur, California, including at least twelve miles of ocean coastline.  Plans were underway to establish another dude ranch at that location.

When the Stock Market Crash occurred in 1929, Warren Gorrell’s investment banking firm and personal wealth were greatly affected.  In the early 1930s, Warren and Demia Gorrell sold their shares in the HF Bar Ranch and an associate or associates of Frank Horton purchased those shares.

In 1923, Frank Horton had become a Wyoming State Senator; and, in 1938, he was elected to the United States House Of Representatives, in which he served as Wyoming’s lone Congressman until 1941.

At the time of her death at the age of 94, Sarah Scovel Gorrell Stewart was the longest-living and the last-surviving member of the Gorrell and Horton families who had experienced the original years of life at the HF Bar Ranch.

“Ginger” Gorrell (Warren Gorrell, Jr.) lived for many years, until his death in 1963, in and around the mountains of Wyoming and Colorado.  He was a physicist and an astronomer, an experienced mountain climber and an expert mountain guide, serving particularly as a guide on Colorado’s Longs Peak.  In 1941, he participated in and helped lead a daring expedition to rescue a parachutist, who had landed on the top of Wyoming’s Devil’s Tower.  To this day, guests of the HF Bar Ranch often journey by horseback to a mountain cabin built by Ginger Gorrell in the mid-1920s and occupied by him until the early 1960s. The tales of Ginger are legion….he was a brilliant man, quite a local character and was very, very close to young Trudy and Jack Horton.

Frank Horton died in Sheridan, Wyoming, in August 1948.  At that time, his second wife, Henriette (“Hank”) Horton, assumed the responsibilities of managing the HF Bar Ranch.

Frank and Gertrude Horton had three grandchildren: Suzanne Horton (Timken), who was born in 1939 in Canton, Ohio. Her children still visit the Ranch on an annual basis.  Jack Ogilvie Horton, Jr., who was born in 1938 in Sheridan, Wyoming, was a graduate of Deefield Academy, Princeton University and a Rhodes Scholar. At the time of his early death in 1981 in Denver, Colorado, he was a member of the Board of Trustees of Princeton University. He had a formidable political career and served in the Department of the Interior during the Nixon and Ford administrations. Gertrude (“Trudy”) Butler Horton (Dixon), who was born in 1939 in Sheridan, Wyoming, and died in 1969 in California of cancer. Trudy left behind her husband, Willard Dixon, San Rafael, California, a son Willard Dixon, Jr., Eugene, Oregon and a daughter, Anne Butler Dixon, Boulder, Colorado. Will Dixon Jr is married to Lynn. They have teen sons, Ben and Miles. Anne Dixon is married to Wolf Becker.

This year of 2021 marks the 42nd year that Margi Schroth has owned and operated the HF Bar Ranch.  Initially, she operated the Ranch with the cooperation of certain minority stockholders, specifically including Henriette (“Hank”) Horton, who died in March 1989, Dean Thomas, who served as foreman of the Ranch from 1931 until his death in 1987, and Anne Butler Dixon (born in 1964) and Will Christopher Dixon (born in 1966), two of the great-grandchildren of Frank and Gertrude Horton.

​In 2012, Margi attained full ownership of the HF Bar Ranch lands, coinciding with the placement of the deeded lands of the ranch being put into a Conservation Easement with the Nature Conservancy. Forever, these lands will be protected from development and will remain as they are today. 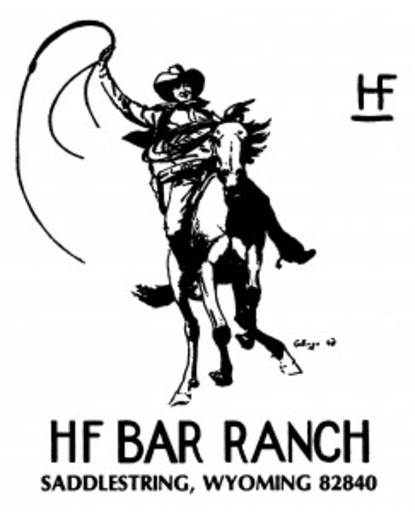